started leisurely again: breakfast and a video call with Roddy who gave me the news that Alex would probably be discharged from hospital today, which was great to hear!

While I was getting ready, two women took a trip on the plane that was parked next to my van. When they came back they told me they had seen 50 whales with calves! Amazing! 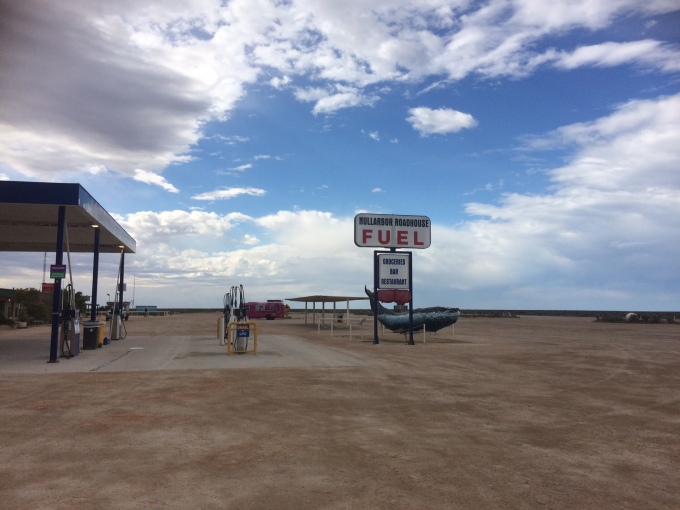 It had rained overnight and more rain was forecast for today. The sky looked thunderous but I have noticed before that here it often looks wild but never really gets going. And so it was. There was some rain but it was all in the green zone so to speak. 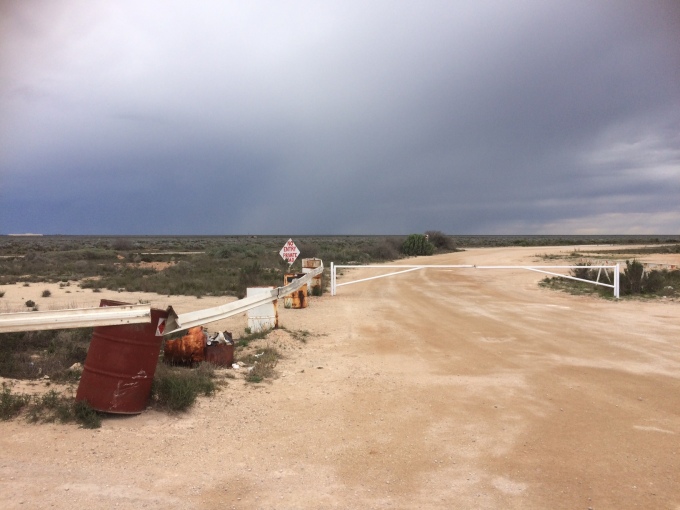 Nullarbor Roadhouse to Eucla. Only 200km, so a very easy day that took me back into Western Australia, wheyhey! I had contemplated going on to the next roadhouse at Mundrabilla as it would cut tomorrow’s drive. I could, of course, stop pretty much anywhere and free camp but I have been told by lots of people to play it safe and to stick to campsites, close the door and windows, etc ‘cause anything can happen in the outback… so the choice was between Eucla with Telstra 3G and a stunning outlook from the campsite, or Mundrabilla where I haven’t stopped before (an advantage in itself) but where there is no 3G. It does, however, have a TV signal … What would you have chosen? I chose Eucla with 3G as TV is mostly rubbish anyway and you can’t get past a great view.

Eucla sits on top of an escarpment that runs along much of the south coast of WA and comes to an end here. From up here you look out over several kilometres of flat land extending towards the ocean. Near the beach, there is an old, ruined telegraph station, which is now buried in sand and well worth a visit (see my much older blog on the Nullarbor).

Enroute I stopped at various look out points to see the fabulous Bunda Cliffs close up before leaving the Bight. Edge of a continent.

The wet road surface made oncoming roadtrains look ghostly! Their whirring ten thousand wheels created a white water aura. They looked like giant caterpillars, floating towards me on a white cloud. Even in dry weather they are a sight and whoosh as they pass, sucking the air from under the van, giving it a shudder. All you can do is hold on to the wheel with both hands to steady the van and hope for the best. It doesn’t help that some of them have signs at the front spelling out EXPLOSIVES in red letters.

Traffic was very light though and I was only overtaken once during the first 150km, after which more traffic appeared miraculously as I was approaching Border Village. Otherwise there were no cars in front or behind me and often none coming towards me for a good ten minutes. To think that this is National Route #1, the ring road round Australia and the only road between the two states!

There are strict quarantine controls between the states, too. WA doesn’t really have any pests and they want to keep it that way. Fruit flies are seen as being the biggest threat so no fruit or veg, plant matter or honey is allowed in. You have to either eat all fruit and veg before crossing, cook it all, throw it away or get fined if you try to smuggle it. Quarantine officers come into the van and check the fridge and any food storage cupboard you might have. They also check for other plant matter in the van, houseplants, firewood, etc. I thought I was being smart as I had googled what was allowed and so I converted my tomatoes and cucumbers into a Greek salad as I had read that if it’s all nicely covered in dressing it’s ok. Well, it wasn’t, and it all got tossed out. So glad I hadn’t added the feta yet! Apparently tomatoes and cucumbers are prime hosts for fruit flies.

At Eucla I managed to reverse Gecko into a narrow space between trees for the best view across the land below. A couple of shaggy sheep strolled by which seemed surreal. The outlook really was spectacular.

My neighbours admired my roof rack and were slightly taken aback when I told them that it was an HF antenna designed by my husband, the spy expert. The man then proceeded to take firewood off his own roof rack and started up his power saw to cut it to size. Fortunately it didn’t take too long as it was disrupting my peace. Australia, the country where a man can be a man!

There is a time difference of 1.5 hours difference between SA and WA but between the border and Caiguna there is an unofficial time zone called the Australian Central Western Standard Time ACWST to allow for the gradual change in day light. This means that the difference is only 45 minutes between Eucla and Perth to the west and to Adelaide to the East. Despite being unofficial, the time zone is locally observed. Due to the sheer size of WA, one time zone makes no sense.

As possibly many of you, I can see Mars from here! First I didn’t realise what this bright red star to the right and below the moon was, but Roddy and Google helped. Tomorrow night it should be the Blood Moon and Mars together! Hopefully the skies will be clear.

An early night for me after a super hot and strong shower for $1. I remembered that I had my hairdryer in the van … I haven’t looked this glamorous for a while!

Nativösoûl – a Sydney band we once saw near Scarborough beach.

Packing up I decided that as soon as I can, I will have to wash all my clothes and all bedding, everything. Six months stuffed into a van is counterindicated for blissfully clean cloth. It will have to be a proper laundrette, too, as campsite washing machines swishle the washing around for 30 minutes in cool water. I need proper German Hausfrau two hour hot washes! You can imagine!

The sky was amazing this morning. There was fog coming in from the ocean – called “haar” in Scotland – and, descending down the Eucla Pass, I drove towards it as it was spreading out over the land. I could see this wall of white in front of me and then a white rainbow developed, forming an arch through which I drove into the mist.

Traffic again was very light and I spotted a Nullarbor curiosity: Along the road there are a number of trees decorated with items. There is the knicker tree, the bottle tree, the shirt tree and the mug tree. Each tree is only decorated with one type of item, so no bottles on the knicker tree. I first thought it was an Aboriginal thing but when I stopped at Madura Roadhouse the old toothless man told me that it was something backpacker started. The Shire keeps taking down the decorations but they keep reappearing. I liked them! He made the point that jocks are not allowed on the knicker tree. He had a wee wry smile on his face. I wonder if he goes there sometimes… 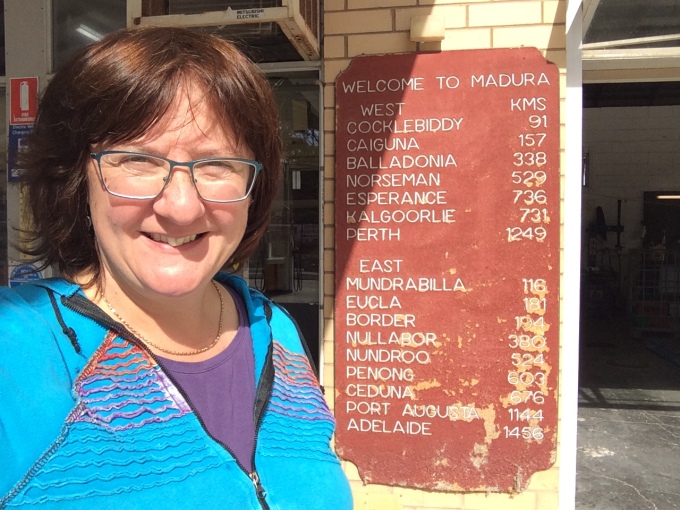 The stretch between Madura and Caiguna is carcass alley. I saw a wedge-tailed eagle sitting on a dead tree, beckoning me to roadkill. It needn’t have done so as there were so many dead kangaroos, it was obscene. Each roadkill is being devoured by crows and wedge-tailed eagles but I also saw two eagles that had been so involved in scavenging that they too became roadkill.

I arrived early at Caiguna and devoted some time to cleaning the toilet. Enough said. 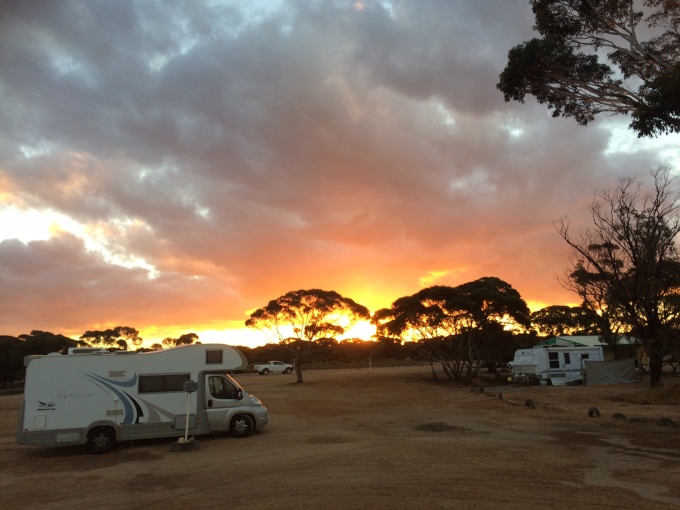 Talking Heads – Stop Making Sense – surely one of the best albums of the 80s! I was pumping along that road. Worry not, Roddy, I stuck to 90km/h!

Proclaimers – “Sunshine on Leith”, first waltz at our wedding. “Cap in Hand”, makes you want to cry FREEDOM!

Live and dead animals as described above.